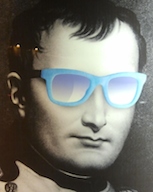 I live in Germany since a bit more than 5 years now. There is something particular in this country that does virtually not exist in France. I believe this something characterizes a lot what German people do, and that can be summarized as the following:

For instance, usefulness justifies ugliness. I am good at doing ugly, now I need useful.

I use git everyday, in a tmux terminal on OSX, and I've never managed to have git commands completion so far. I was also jaleous from all those people that configured oh my zsh on their computer, such that they have fancy coloring and more things I do not know about.

Here is what my .bashrc looks like on my OSX machine :

Of course, it did not work out of the box and took me a bit more time than expected to make it work. The important bits were:

For the first bullet above, it means that if you want to change to color of the foreground and background before a specific placeholder such as \u, you have to use \[\] before the \w (prints current path), example:

In the above, we see 2 groups: one before and one after the \w, respectiveley \[\e[45m\e[1;30m\] for magenta background+bold+black text, and \[\e[0m\] for resetting all attributes. Not putting things in group would mess up your terminal, in particular you will not be able to see properly previous commands with the up arrow.

I haven't lied when I told you I can do ugly...